A Southeast Asian country, India is considered to be the seventh-largest country in the world by area. It is bordered by Pakistan to the northwest, Nepal, China and Bhutan to the north, and Bangladesh and Myanmar to the east. The island country, Sri Lanka, sits around 40 miles off India’s southeastern coast.

A large proportion of India sits within a peninsula, surrounded to the west by the Arabian Sea, and the Bay of Bengal to the east. These two bodies of water are divided by the southernmost point of mainland India, Cape Comorin.

Mainland India is part of a well-defined subcontinent, alongside Bangladesh and Pakistan. This subcontinent is divided from the rest of Asia by part of the Himalayas, a mountain range containing some of the world's highest peaks, which also forms the northern limit of India.

India has a strongly monsoonal climate, characterised by alternating wet and dry seasons. India’s wet season, the southwest monsoon, during which around three-quarters of the country’s total precipitation falls, generally begins in June and ends in September. The driest months are between November and February, when the dry air from the Asian interior moves across India toward the ocean. There are three climatic seasons in general: between mid-June and September the weather is hot and wet, it is cool and dry between early October and February, and typically hot and dry from around March to June.

Tropical cyclones can occur in India shortly before or after monsoon season. They are often accompanied by intense rain and stormy tides, and commonly affect the Andhra Pradesh, Odisha, and West Bengal coasts. 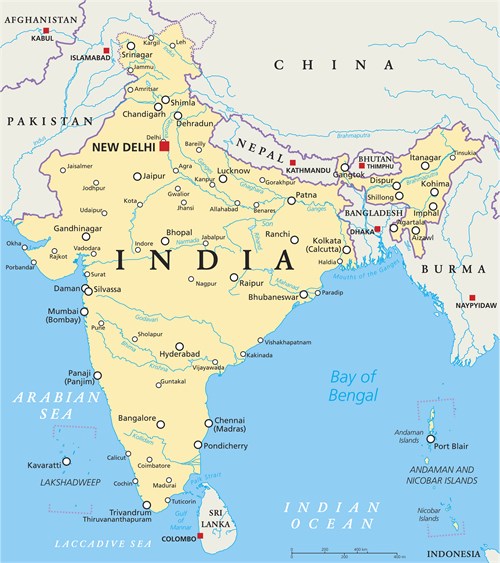 India has a federal constitutional set up, and many key issues are devolved to the states, of which there are 29, as well as one quasi-state and six Union Territories.

Although over the last two decades the political scene in the country has become increasingly fragmented, giving some power to a greater number of smaller regional, caste-based parties, the Congress Party and the Bharatiya Janata Party (BJP) remained the only two parties with national reach in Indian politics.

When Prime Minister Narendra Modi of the BJP assumed office in 2014, becoming India's first Prime Minister to be born after independence, this fragmentation was reversed and the party won an absolute majority, the first time in 30 years a single party had won outright. The BJP were also the first non-congress party to achieve this.

The BJP is currently governing alongside a coalition of 12 parties, known as the National Democratic Alliance (NDA), which has 353 members in the Lok Sabha, constituting a majority. In the upper parliamentary house, however, the party does not have a majority. Therefore, the Prime Minister has suggested a ‘co-operative federalism’ model as he must work with state parties in order to achieve his legislative agenda.

India, like many emerging economies, has seen slowing growth since the global financial crisis, although it has recovered well. Even in the depth of the crisis, the country’s growth only fell to 6.7%, although in the period between 2013 and 2014, growth slowed to 4.7%. Industry has seen the sharpest slowdown and a strong recovery is not expected.

Prime Minister Modi’s new Government, however, has ignited fresh expectations, provoking optimism and confidence surrounding the future of business, although some have complained that the government’s incremental reforms are too slow.

A number of ‘big ideas’ have also been proposed by Modi’s Government, including ‘Make in India’, creating 100 ‘Smart Cities’ and ‘Clean India’. These are intended to assist the government’s goal of improving the country’s infrastructure, prosperity and moving from services driven growth to an export-orientated economy. The Prime Minister also intends to deliver on his party’s economic goals with the help of foreign policy, although the government has faced huge challenges.

Inflation, for example, is a major concern for the Indian economy and interest rates are hitting highs of 8%, which limits the possibility of manoeuvre on monetary policy.

India’s current account deficit compounds the country’s economic vulnerability when added to its trade deficit. The country is sensitive to oil prices as energy related imports make up around 7.5% of GDP, whilst gold and crude oil combined account for about 40% of imports. Service exports, remittances and foreign capital are relied upon in order to plug the gap and build foreign exchange reserves, although challenges have decreased due to a recent increased import duty on gold, as well as the depreciation of the Rupee and improvements in the global economy. Regional free trade agreements have helped India diversify its export markets, too.

However, further action will be necessary to allow the country to capitalise fully on its ‘demographic dividend’ — half of the population are under 25 years old. Increasing both public and private investment in infrastructure, as well as improving public services such as education, health and skills, and working on issues like taxation, corruption and bureaucracy should help India maximise its ‘demographic dividend’.

A number of reforms are being undertaken to open up the economy through higher FDI limits in retail, aviation and broadcasting. The government has also facilitated speedier clearances of stalled investment projects and increased retail prices on some fuel products to strengthen the country's long term economic prospects.

Contact a DIT Export Adviser at: https://www.great.gov.uk/contact/triage/location/ for a free consultation if you are interested in exporting to India.

Benefits for UK businesses include:

Industries exporting out of India

The International Monetary Fund (IMF) has forecast a 5.8% growth in gross domestic product (GDP) for 2020.

The majority of trade barriers have been removed to improve India’s business environment, creating huge investment potential in sectors such as life sciences, energy, manufacturing and infrastructure.

The British Government is supporting the Indian Government to tackle these challenges, which include the protection and promotion of human rights.

India is a member of the International Labour Organization. The country adopted the 2009 Right to Education Act, which ensures that education is free, compulsory and of high quality for all 6-14 year olds. However, the implementation of the act can vary between states. Child labour remains a problem in India, particularly in the textile industry.

Several NGOs, including Save the Children, have partnered with the Department for International Development in order to end child labour and implement India’s Right to Education Act.

Indian workers are protected from discrimination based on ethnicity, gender and religion by Indian Labour Law, but there are no provisions against discrimination in terms of sexuality and gender identity. The Indian Supreme Court set aside a ruling of the Delhi High Court in December 2009 that decriminalised homosexuality. Prosecutions of gay people are rare, but engaging in homosexual acts can result in a prison sentence.

India has over 14,000 registered trade unions. The figure has risen steadily thanks to governmental measures which facilitate collective bargaining through appropriate legislations and as a result of increasing political consciousness among labourers.